An introduction to the SCOUT-AMMA stratospheric aircraft, balloons and sondes compaign in West Africa, August 2006 : rationale and roadmap

A multi-platform field measurement campaign involving aircraft and balloons took place overWest Africa between 26 July and 25 August 2006, in the frame of the concomitant AMMA Special Observing Period and SCOUT-O3 African tropical activities. Specifically aiming at sampling the upper troposphere and lower stratosphere, the high-altitude research aircraft M55 Geophysica was deployed in Ouagadougou (12.3° N, 1.7° W), Burkina Faso, in conjunction with the German D- 20 Falcon, while a series of stratospheric balloons and sonde flights were conducted from Niamey (13.5° N, 2.0° E), Niger. Altogether, these measurements were intended to provide experimental evidence for a better understanding of large scale transport, assessing the effect of lightning on NOx production, and studying the impact of intense mesoscale convective systems on water, aerosol, dust and chemical species in the upper troposphere and lower stratosphere. The M55 Geophysica carried out five local and four transfer flights between southern Europe and the Sahel and back, while eight stratospheric balloons and twenty-nine sondes were flown from Niamey. These experiments allowed a characterization of the tropopause and lower stratosphere of the region. ... mehrThe paper provides an overview of SCOUT-AMMA campaign activities together with a description of the meteorology of the African monsoon and the situation prevailing during the flights and a brief summary of the observations accomplished. 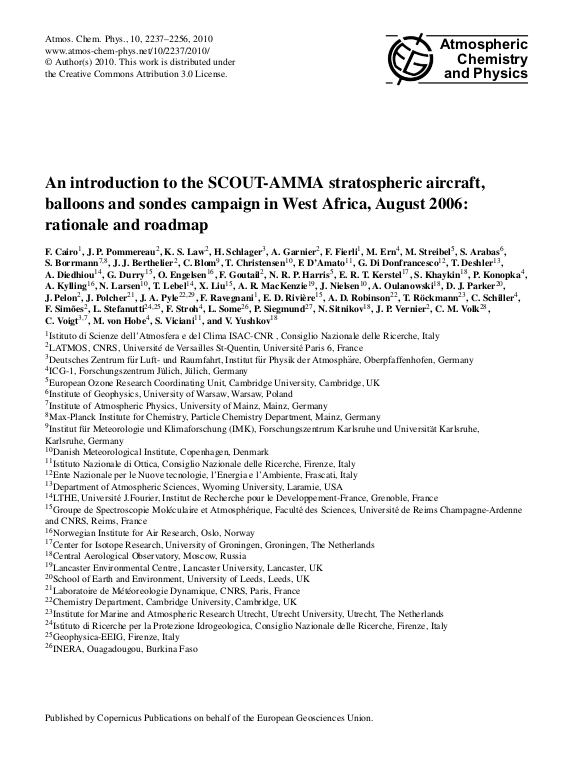