Combined ATLAS and CMS measurements of the Higgs boson production and decay rates, as well as constraints on its couplings to vector bosons and fermions, are presented. The combination is based on the analysis of five production processes, namely gluon fusion, vector boson fusion, and associated production with a W or a Z boson or a pair of top quarks, and of the six decay modes H → ZZ, W W , γγ , ττ, bb , and μμ . All results are reported assuming a value of 125 . 09 GeV for the Higgs boson mass, the result of the combined measurement by the ATLAS and CMS experiments. The analysis uses the CERN LHC proton-proton collision data recorded by the ATLAS and CMS experiments in 2011 and 2012, corresponding to integrated luminosities per experiment of approximately 5 fb −1 at s = 7 s√=7 TeV and 20 fb −1 at s = 8 s√=8 TeV. The Higgs boson production and decay rates measured by the two experiments are combined within the context of three generic parameterisations: two based on cross sections and branching fractions, and one on ratios of coupling modifiers. Several interpretations of the measurements with more model-dependent parameterisations are also given. ... mehrThe combined signal yield relative to the Standard Model prediction is measured to be 1 . 09 ± 0 . 11. The combined measurements lead to observed significances for the vector boson fusion production process and for the H → ττ decay of 5 . 4 and 5 . 5 standard deviations, respectively. The data are consistent with the Standard Model predictions for all parameterisations considered. 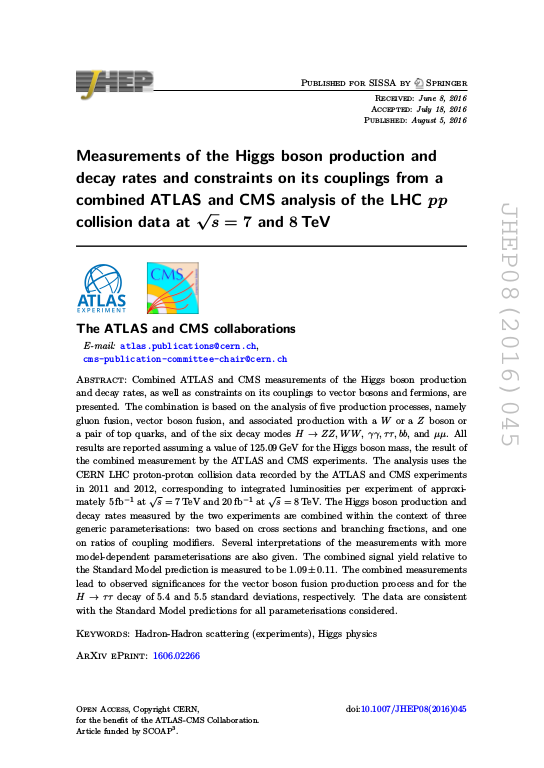