We report a first measurement for ultrahigh energy cosmic rays of the correlation between the depth of shower maximum and the signal in the water Cherenkov stations of air-showers registered simultaneously by the fluorescence and the surface detectors of the Pierre Auger Observatory. Such a correlation measurement is a unique feature of a hybrid air-shower observatory with sensitivity to both the electromagnetic and muonic components. It allows an accurate determination of the spread of primary masses in the cosmic-ray flux. Up till now, constraints on the spread of primary masses have been dominated by systematic uncertainties. The present correlation measurement is not affected by systematics in the measurement of the depth of shower maximum or the signal in the water Cherenkov stations. The analysis relies on general characteristics of air showers and is thus robust also with respect to uncertainties in hadronic event generators. The observed correlation in the energy range around the ‘ankle’ at lg⁡(E/eV)=18.5–19.0 differs significantly from expectations for pure primary cosmic-ray compositions. A light composition made up of proton and helium only is equally inconsistent with observations. ... mehrThe data are explained well by a mixed composition including nuclei with mass A>4 . Scenarios such as the proton dip model, with almost pure compositions, are thus disfavored as the sole explanation of the ultrahigh-energy cosmic-ray flux at Earth. 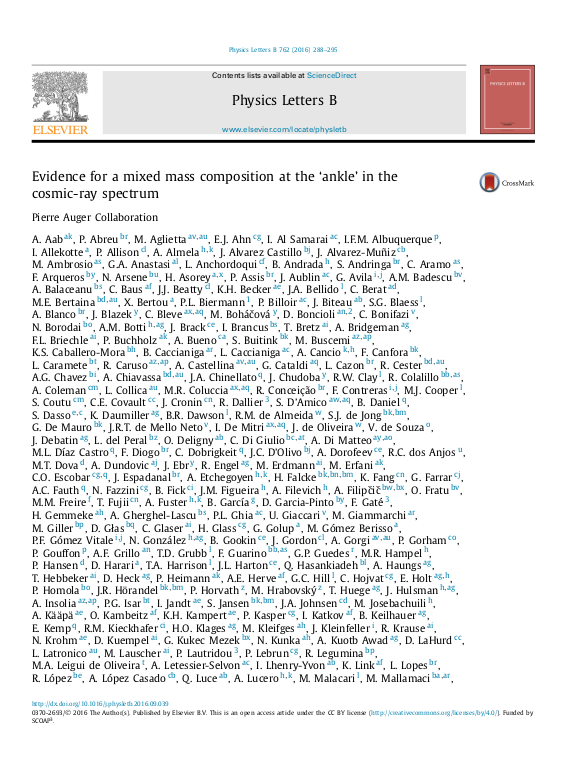