Abstract. Accurate assessment of anthropogenic carbon dioxide (CO2) emissions and their redistribution among the atmosphere, ocean, and terrestrial biosphere – the “global carbon budget” – is important to better understand the global carbon cycle, support the development of climate policies, and project future climate change. Here we describe data sets and methodology to quantify all major components of the global carbon budget, including their uncertainties, based on the combination of a range of data, algorithms, statistics, and model estimates and their interpretation by a broad scientific community. We discuss changes compared to previous estimates and consistency within and among components, alongside methodology and data limitations. CO2 emissions from fossil fuels and industry (EFF) are based on energy statistics and cement production data, respectively, while emissions from land-use change (ELUC), mainly deforestation, are based on combined evidence from land-cover change data, fire activity associated with deforestation, and models. The global atmospheric CO2 concentration is measured directly and its rate of growth (GATM) is computed from the annual changes in concentration. ... mehrThe mean ocean CO2 sink (SOCEAN) is based on observations from the 1990s, while the annual anomalies and trends are estimated with ocean models. The variability in SOCEAN is evaluated with data products based on surveys of ocean CO2 measurements. The global residual terrestrial CO2 sink (SLAND) is estimated by the difference of the other terms of the global carbon budget and compared to results of independent dynamic global vegetation models. We compare the mean land and ocean fluxes and their variability to estimates from three atmospheric inverse methods for three broad latitude bands. All uncertainties are reported as ±1σ, reflecting the current capacity to characterise the annual estimates of each component of the global carbon budget. For the last decade available (2006–2015), EFF was 9.3 ± 0.5 GtC yr−1, ELUC 1.0 ± 0.5 GtC yr−1, GATM 4.5 ± 0.1 GtC yr−1, SOCEAN 2.6 ± 0.5 GtC yr−1, and SLAND 3.1 ± 0.9 GtC yr−1. For year 2015 alone, the growth in EFF was approximately zero and emissions remained at 9.9 ± 0.5 GtC yr−1, showing a slowdown in growth of these emissions compared to the average growth of 1.8 % yr−1 that took place during 2006–2015. Also, for 2015, ELUC was 1.3 ± 0.5 GtC yr−1, GATM was 6.3 ± 0.2 GtC yr−1, SOCEAN was 3.0 ± 0.5 GtC yr−1, and SLAND was 1.9 ± 0.9 GtC yr−1. GATM was higher in 2015 compared to the past decade (2006–2015), reflecting a smaller SLAND for that year. The global atmospheric CO2 concentration reached 399.4 ± 0.1 ppm averaged over 2015. For 2016, preliminary data indicate the continuation of low growth in EFF with +0.2 % (range of −1.0 to +1.8 %) based on national emissions projections for China and USA, and projections of gross domestic product corrected for recent changes in the carbon intensity of the economy for the rest of the world. In spite of the low growth of EFF in 2016, the growth rate in atmospheric CO2 concentration is expected to be relatively high because of the persistence of the smaller residual terrestrial sink (SLAND) in response to El Niño conditions of 2015–2016. From this projection of EFF and assumed constant ELUC for 2016, cumulative emissions of CO2 will reach 565 ± 55 GtC (2075 ± 205 GtCO2) for 1870–2016, about 75 % from EFF and 25 % from ELUC. This living data update documents changes in the methods and data sets used in this new carbon budget compared with previous publications of this data set (Le Quéré et al., 2015b, a, 2014, 2013). All observations presented here can be downloaded from the Carbon Dioxide Information Analysis Center (doi:10.3334/CDIAC/GCP_2016). 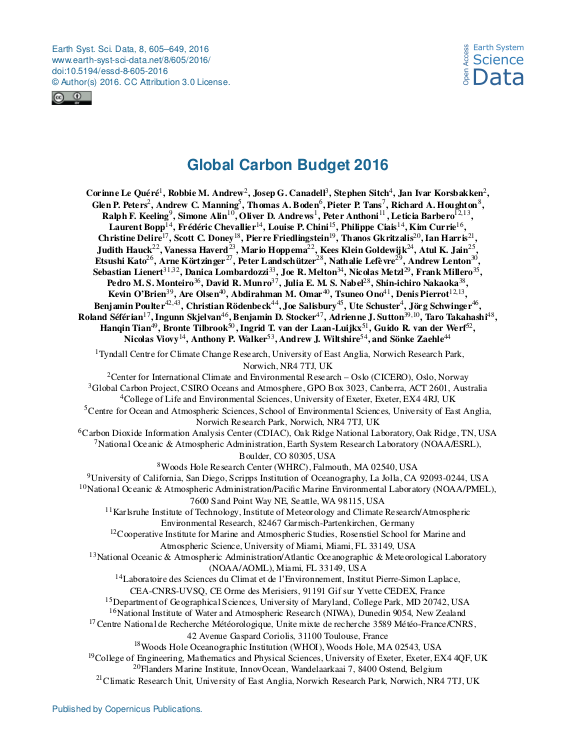