The growth of aerosol due to the aqueous phase oxidation of sulfur dioxide by ozone was measured in laboratory-generated clouds created in the Cosmics Leaving OUtdoor Droplets (CLOUD) chamber at the European Organization for Nuclear Research (CERN). Experiments were performed at 10 and -10° C, on acidic (sulfuric acid) and on partially to fully neutralised (ammonium sulfate) seed aerosol. Clouds were generated by performing an adiabatic expansion – pressurising the chamber to 220 hPa above atmospheric pressure, and then rapidly releasing the excess pressure, resulting in a cooling, condensation of water on the aerosol and a cloud lifetime of approximately 6 min. A model was developed to compare the observed aerosol growth with that predicted using oxidation rate constants previously measured in bulk solutions. The model captured the measured aerosol growth very well for experiments performed at 10 and -10° C, indicating that, in contrast to some previous studies, the oxidation rates of SO$_{2}$ in a dispersed aqueous system can be well represented by using accepted rate constants, based on bulk measurements. To the best of our knowledge, these are the first laboratory-based measurements of aqueous phase oxidation in a dispersed, supercooled population of droplets. ... mehrThe measurements are therefore important in confirming that the extrapolation of currently accepted reaction rate constants to temperatures below 0° C is correct. 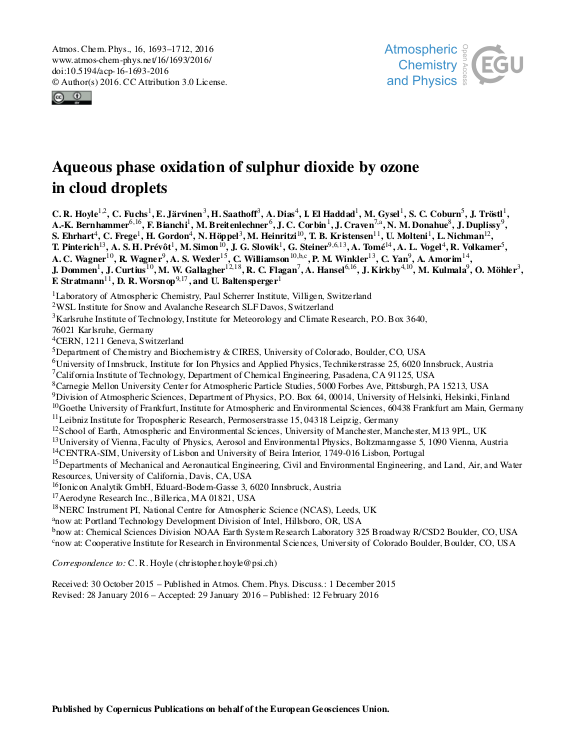