Background
The fungal genus Aspergillus is of critical importance to humankind. Species include those with industrial applications, important pathogens of humans, animals and crops, a source of potent carcinogenic contaminants of food, and an important genetic model. The genome sequences of eight aspergilli have already been explored to investigate aspects of fungal biology, raising questions about evolution and specialization within this genus.
Results
We have generated genome sequences for ten novel, highly diverse Aspergillus species and compared these in detail to sister and more distant genera. Comparative studies of key aspects of fungal biology, including primary and secondary metabolism, stress response, biomass degradation, and signal transduction, revealed both conservation and diversity among the species. Observed genomic differences were validated with experimental studies. This revealed several highlights, such as the potential for sex in asexual species, organic acid production genes being a key feature of black aspergilli, alternative approaches for degrading plant biomass, and indications for the genetic basis of stress response. ... mehrA genome-wide phylogenetic analysis demonstrated in detail the relationship of the newly genome sequenced species with other aspergilli.
Conclusions
Many aspects of biological differences between fungal species cannot be explained by current knowledge obtained from genome sequences. The comparative genomics and experimental study, presented here, allows for the first time a genus-wide view of the biological diversity of the aspergilli and in many, but not all, cases linked genome differences to phenotype. Insights gained could be exploited for biotechnological and medical applications of fungi. 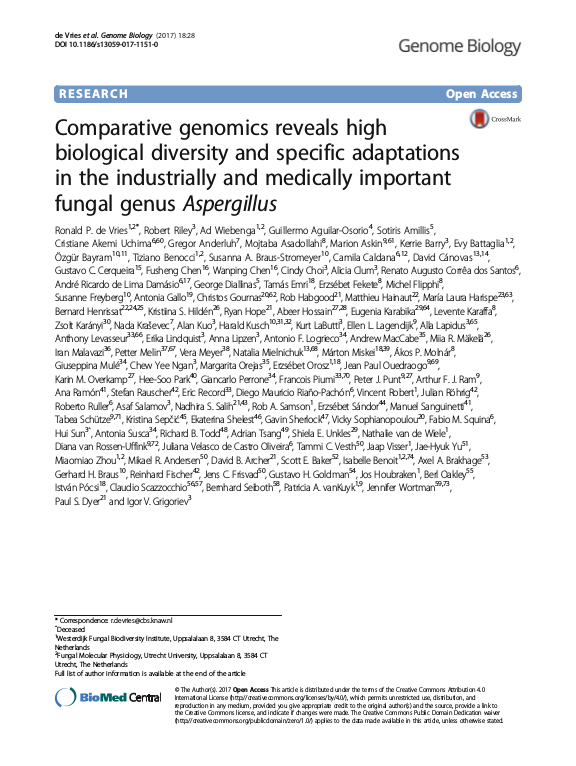