The Arctic Cloud Puzzle: Using ACLOUD/PASCAL Multi-Platform Observations to Unravel the Role of Clouds and Aerosol Particles in Arctic Amplification

A consortium of polar scientists combined observational forces in a field campaign of unprecedented complexity to uncover the secrets of clouds and their role in Arctic amplification. Two research aircraft, an icebreaker research vessel, an ice-floe camp including an instrumented tethered balloon, and a permanent ground-based measurement station were employed in this endeavour.
Clouds play an important role in Arctic amplification. This term represents the recently observed enhanced warming of the Arctic relative to the global increase of near-surface air temperature. However, there are still important knowledge gaps regarding the interplay between Arctic clouds and aerosol particles, surface properties, as well as turbulent and radiative fluxes that inhibit accurate model simulations of clouds in the Arctic climate system. In an attempt to resolve this so-called Arctic cloud puzzle, two comprehensive and closely coordinated field studies were conducted: the ”Arctic CLoud Observations Using airborne measurements during polar Day (ACLOUD)” aircraft campaign, and the ”Physical feedbacks of Arctic boundary layer, Sea ice, Cloud and AerosoL (PASCAL)” ice breaker expedition. ... mehrBoth observational studies were performed in the framework of the German ”ArctiC Amplification:Climate Relevant Atmospheric and SurfaCe Processes, and Feedback Mechanisms (AC)3” project. They took place in the vicinity of Svalbard (Norway) in May and June 2017. ACLOUD and PASCAL explored four pieces of the Arctic cloud puzzle: Cloud properties, aerosol impact on clouds, atmospheric radiation, and turbulent-dynamical processes. The two instrumented Polar 5 and Polar 6 aircraft, the icebreaker research vessel (RV) Polarstern, an ice-floe camp including an instrumented tethered balloon, and the permanent, ground-based measurement station at Ny-Ålesund (Svalbard) were employed to observe Arctic low and mid-level, mixed-phase clouds, and to investigate related atmospheric and surface processes. The Polar 5 aircraft served as a remote sensing observatory examining the clouds from above by downward-looking sensors; the Polar 6 aircraft operated as a flying in-situ measurement laboratory sampling inside and below the clouds. Most of the collocated Polar 5/6 flights were conducted either above RV Polarstern or over the Ny-Ålesund station, both of which monitored the clouds from below using similar but upward-looking remote sensing techniques as the Polar 5 aircraft. Several of the flights were carried out underneath collocated satellite tracks. The paper motivates the scientific objectives of the ACLOUD/PASCAL observations and describes the measured quantities, retrieved parameters, and the applied complementary instrumentation. Furthermore, it discusses selected measurement results, and poses critical research questions to be answered in future papers analyzing the data from the two field campaigns. 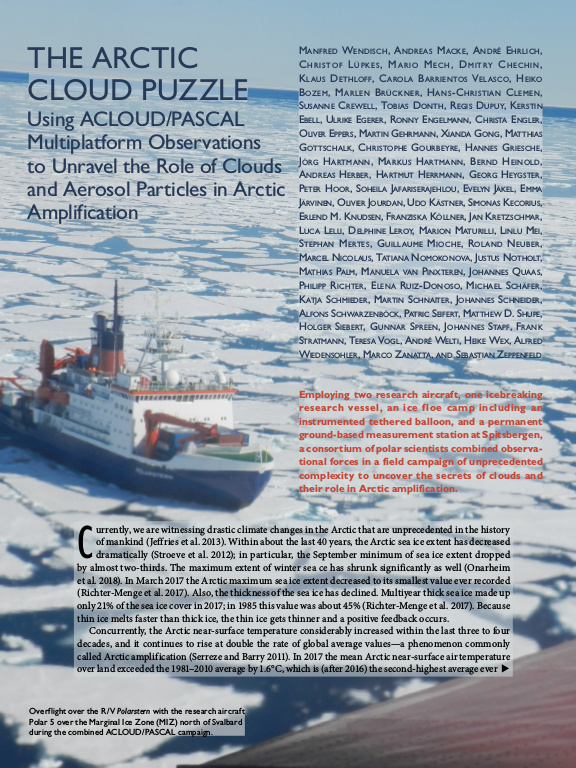