In ITER and DEMO, various control objectives related to plasma control must be simultaneously achieved by the plasma control system (PCS), in both normal operation as well as off-normal conditions. The PCS must act on off-normal events and deviations from the target scenario, since certain sequences (chains) of events can precede disruptions. It is important that these decisions are made while maintaining a coherent prioritization between the real-time control tasks to ensure high-performance operation. In this paper, a generic architecture for task-based integrated plasma control is proposed. The architecture is characterized by the separation of state estimation, event detection, decisions and task execution among different algorithms, with standardized signal interfaces. Central to the architecture are a plasma state monitor and supervisory controller. In the plasma state monitor, discrete events in the continuous-valued plasma state are modeled using finite state machines. This provides a high-level representation of the plasma state. The supervisory controller coordinates the execution of multiple plasma control tasks by assigning task priorities, based on the finite states of the plasma and the pulse schedule. ... mehrThese algorithms were implemented on the TCV digital control system and integrated with actuator resource management and existing state estimation algorithms and controllers. The plasma state monitor on TCV can track a multitude of plasma events, related to plasma current, rotating and locked neoclassical tearing modes, and position displacements. In TCV experiments on simultaneous control of plasma pressure, safety factor profile and NTMs using electron cyclotron heating (ECH) and current drive (ECCD), the supervisory controller assigns priorities to the relevant control tasks. The tasks are then executed by feedback controllers and actuator allocation management. This work forms a significant step forward in the ongoing integration of control capabilities in experiments on TCV, in support of tokamak reactor operation. 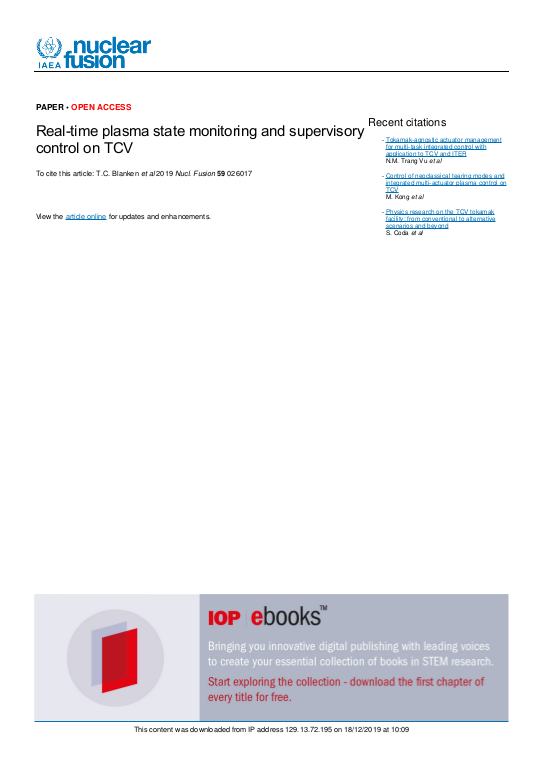