Six months of stratospheric aerosol observations with the European Aerosol Research Lidar Network (EARLINET) from August 2017 to January 2018 are presented. The decay phase of an unprecedented, record-breaking stratospheric perturbation caused by wildfire smoke is reported and discussed in terms of geometrical, optical, and microphysical aerosol properties. Enormous amounts of smoke were injected into the upper troposphere and lower stratosphere over fire areas in western Canada on 12 August 2017 during strong thunderstorm–pyrocumulonimbus activity. The stratospheric fire plumes spread over the entire Northern Hemisphere in the following weeks and months. Twenty-eight European lidar stations from northern Norway to southern Portugal and the eastern Mediterranean monitored the strong stratospheric perturbation on a continental scale. The main smoke layer (over central, western, southern, and eastern Europe) was found at heights between 15 and 20 km since September 2017 (about 2 weeks after entering the stratosphere). Thin layers of smoke were detected at heights of up to 22–23 km. The stratospheric aerosol optical thickness at 532 nm decreased from values > 0.25 on 21–23 August 2017 to 0.005–0.03 until 5–10 September and was mainly 0.003–0.004 from October to December 2017 and thus was still significantly above the stratospheric background (0.001–0.002). ... mehrStratospheric particle extinction coefficients (532 nm) were as high as 50–200 Mm−1 until the beginning of September and on the order of 1 Mm−1 (0.5–5 Mm−1) from October 2017 until the end of January 2018. The corresponding layer mean particle mass concentration was on the order of 0.05–0.5 µg m−3 over these months. Soot particles (light-absorbing carbonaceous particles) are efficient ice-nucleating particles (INPs) at upper tropospheric (cirrus) temperatures and available to influence cirrus formation when entering the tropopause from above. We estimated INP concentrations of 50–500 L−1 until the first days in September and afterwards 5–50 L−1 until the end of the year 2017 in the lower stratosphere for typical cirrus formation temperatures of −55 ∘C and an ice supersaturation level of 1.15. The measured profiles of the particle linear depolarization ratio indicated a predominance of nonspherical smoke particles. The 532 nm depolarization ratio decreased slowly with time in the main smoke layer from values of 0.15–0.25 (August–September) to values of 0.05–0.10 (October–November) and < 0.05 (December–January). The decrease of the depolarization ratio is consistent with aging of the smoke particles, growing of a coating around the solid black carbon core (aggregates), and thus change of the shape towards a spherical form. We found ascending aerosol layer features over the most southern European stations, especially over the eastern Mediterranean at 32–35∘ N, that ascended from heights of about 18–19 to 22–23 km from the beginning of October to the beginning of December 2017 (about 2 km per month). We discuss several transport and lifting mechanisms that may have had an impact on the found aerosol layering structures. 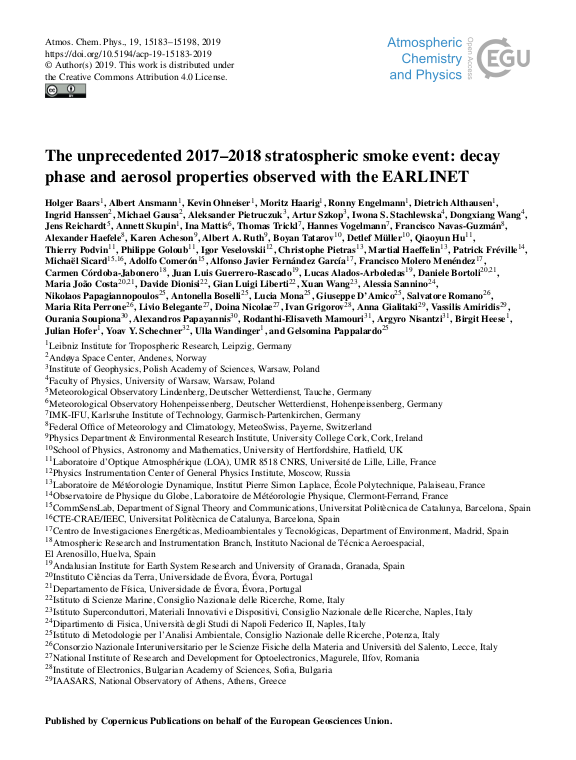