For several weeks in summer 2017, strong smoke layers were observed over Europe at numerous EARLINET
stations. EARLINET is the European research lidar network and part of ACTRIS and comprises more than 30
ground-based lidars.
The smoke layers were observed in the troposphere as well as in the stratosphere up to 25 km from Northern
Scandinavia over whole western and central Europe to the Mediterranean regions.
Backward trajectory analysis among other tools revealed that these smoke layers originated from strong wild fires
in western Canada in combination with pyrocumulus convection. An extraordinary fire event in the mid of August
caused intense smoke layers that were observed across Europe for several weeks starting on 18 August 2017.
Maximum aerosol optical depths up to 1.0 at 532 nm were observed at Leipzig, Germany, on 22 August 2017
during the peak of this event.
The stratospheric smoke layers reached extinction coefficient values of more than 600 Mm−1 at 532 nm, a factor
of 10 higher than observed for volcanic ash after the Pinatubo eruption in the 1990s. First analyses of the intensive
optical properties revealed low particle depolarization values at 532 nm for the tropospheric smoke (spherical
... mehr
particles) and rather high values (up to 20%) in the stratosphere. However, a strong wavelength dependence of
the depolarization ratio was measured for the stratospheric smoke. This indicates irregularly shaped stratospheric
smoke particles in the size range of the accumulation mode. This unique depolarization feature makes it possible
to distinguish clearly smoke aerosol from cirrus clouds or other aerosol types by polarization lidar measurements.
Particle extinction-to-backscatter ratios were rather low in the order of 40 to 50 sr at 355 nm, while values between
70-90 sr were measured at higher wavelengths.
In the western and central Mediterranean, stratospheric smoke layers were most prominent in the end of August
at heights between 16 and 20 km. In contrast, stratospheric smoke started to occur in the eastern Mediterranean
(Cyprus and Israel) in the beginning of September between 18 and 23 km. Stratospheric smoke was still visible in
the beginning of October at certain locations (e.g. Evora, Portugal), while tropospheric smoke was mainly observed
until the end of August within Europe.
An overview of the smoke layers measured at several EARLINET sites will be given. The temporal development
of these layers as well as their geometrical and optical properties will be presented. 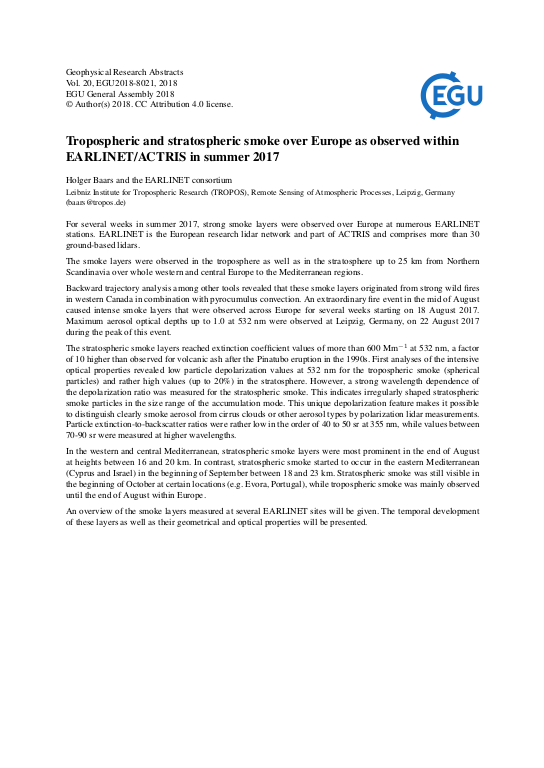