More than one hundred days were simulated over very large domains with fine (0.156 km to 2.5 km) grid spacing for realistic conditions to test the hypothesis that storm (kilometer) and large-eddy (hectometer) resolving simulations would provide an improved representation of clouds and precipitation in atmospheric simulations. At scales that resolve convective storms (storm-resolving for short), the vertical velocity variance becomes resolved and a better physical basis is achieved for representing clouds and precipitation. Similarly to past studies we found an improved representation of precipitation at kilometer scales, as compared to models with parameterized convection. The main precipitation features (location, diurnal cycle and spatial propagation) are well captured already at kilometer scales, and refining resolution to hectometer scales does not substantially change the simulations in these respects. It does, however, lead to a reduction in the precipitation on the time-scales considered – most notably over the ocean in the tropics. Changes in the distribution of precipitation, with less frequent extremes are also found in simulations incorporating hectometer scales. ... mehrHectometer scales appear to be more important for the representation of clouds, and make it possible to capture many important aspects of the cloud field, from the vertical distribution of cloud cover, to the distribution of cloud sizes, and to the diel (daily) cycle. Qualitative improvements, particularly in the ability to differentiate cumulus from stratiform clouds, are seen when one reduces the grid spacing from kilometer to hectometer scales. At the hectometer scale new challenges arise, but the similarity of observed and simulated scales, and the more direct connection between the circulation and the unconstrained degrees of freedom make these challenges less daunting. This quality, combined with already improved simulation as compared to more parameterized models, underpins our conviction that the use and further development of storm-resolving models offers exciting opportunities for advancing understanding of climate and climate change. 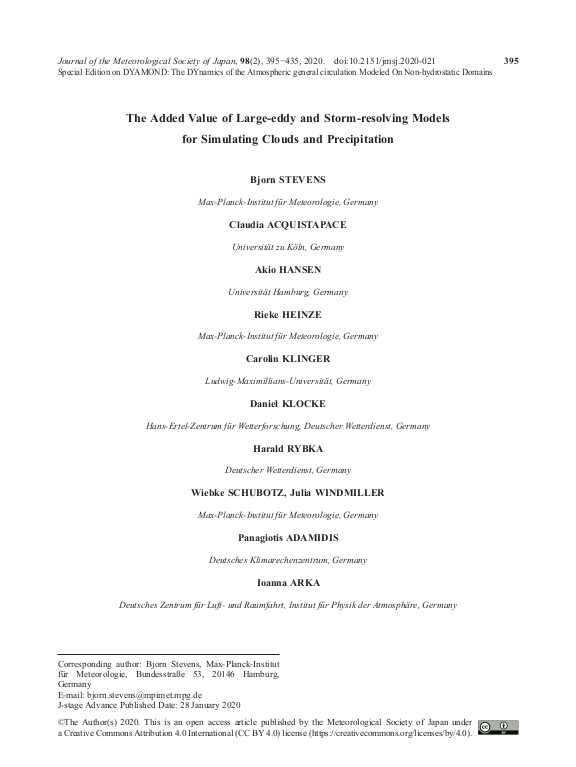