Wildfire occurrence is influenced by climate, vegetation and human activities. A key challenge for understanding the risk of fires is quantifying the mediating effect of vegetation on fire regimes. Here, we explore the relative importance of Holocene land cover, land use, dominant functional forest type, and climate dynamics on biomass burning in temperate and boreo-nemoral regions of central and eastern Europe over the past 12 kyr. We used an extensive data set of Holocene pollen and sedimentary charcoal records, in combination with climate simulations and statistical modelling. Biomass burning was highest during the early Holocene and lowest during the mid-Holocene in all three ecoregions (Atlantic, continental and boreo-nemoral) but was more spatially variable over the past 3–4 kyr. Although climate explained a significant variance in biomass burning during the early Holocene, tree cover was consistently the highest predictor of past biomass burning over the past 8 kyr. In temperate forests, biomass burning was high at ~ 45% tree cover and decreased to a minimum at between 60% and 70% tree cover. In needleleaf-dominated forests, biomass burning was highest at ~60 %–65%tree cover and steeply declined at > 65% tree cover. ... mehrBiomass burning also increased when arable lands and grasslands reached ~15 %–20 %, although this relationship was variable depending on land use practice via ignition sources, fuel type and quantities. Higher tree cover reduced the amount of solar radiation reaching the forest floor and could provide moister, more wind-protected microclimates underneath canopies, thereby decreasing fuel flammability. Tree cover at which biomass burning increased appears to be driven by warmer and drier summer conditions during the early Holocene and by increasing human influence on land cover during the late Holocene. We suggest that longterm fire hazard may be effectively reduced through land cover management, given that land cover has controlled fire regimes under the dynamic climates of the Holocene. 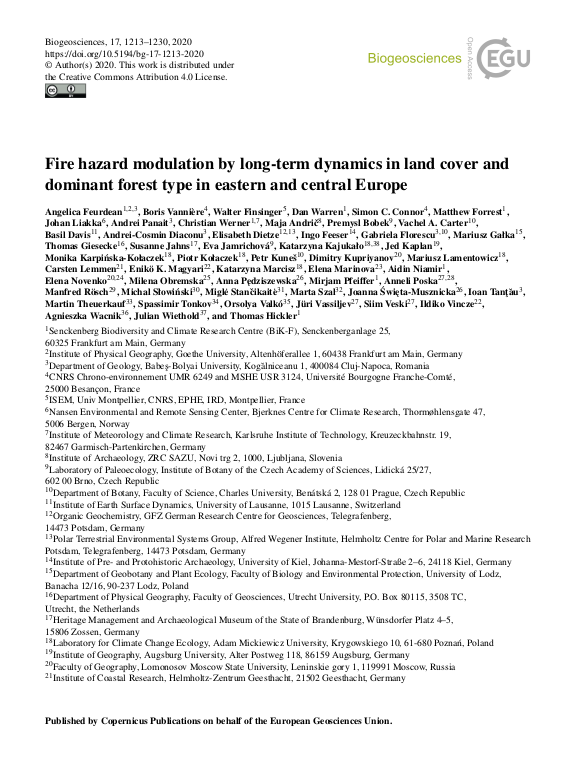