In this study, beryllium tiles from Joint European Torus (JET) vacuum vessel wall were analysed and compared regarding their position in the vacuum vessel and differences in the exploitation conditions during two campaigns of ITER-Like-Wall (ILW) in 2011–2012 (ILW1) and 2013–2014 (ILW2) Tritium content in beryllium samples were assessed. Two methods were used to measure tritium content in the samples – dissolution under controlled conditions and tritium thermal desorption. Prior to desorption and dissolution experiments, scanning electron microscopy and energy dispersive x-ray spectroscopy were used to study structure and chemical composition of plasma-facing-surfaces of the beryllium samples. Experimental results revealed that tritium content in the samples is in range of 2·10$^{11}$–2·10$^{13}$ tritium atoms per square centimetre of the surface area with its highest content in the samples from the outer wall of the vacuum vessel (up to 1.9·10$^{13}$ atoms/cm$^{2}$ in ILW1 campaign and 2.4·10$^{13}$ atoms/cm$^{2}$ in ILW2). The lowest content of tritium was found in the upper part of the vacuum vessel (2.0·10$^{12}$ atoms/cm$^{2}$ and 2.0·10$^{11}$ atoms/cm$^{2}$ in ILW1 and ILW2, respectively).
... mehr
Results obtained from scanning electron microscopy has shown that surface morphology is different within single tile, however if to compare two campaigns main tendencies remains similar. 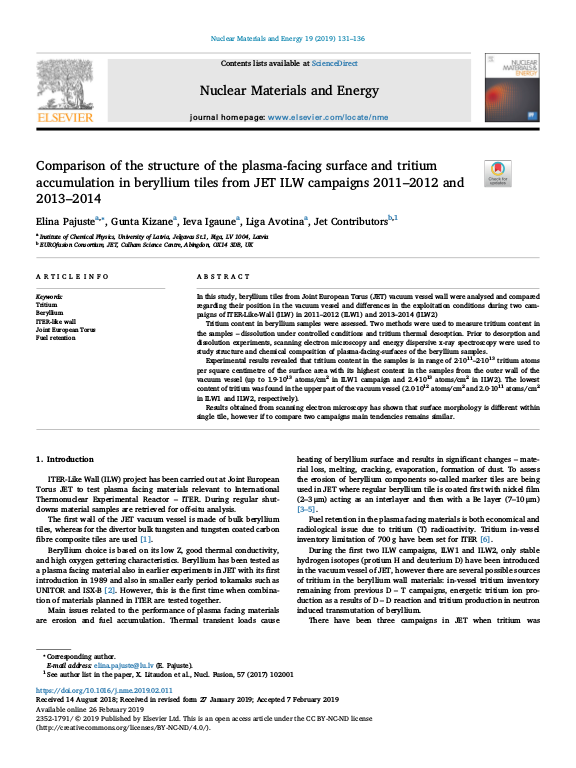