Selected set of samples from JET ITER-Like Wall (JET-ILW) divertor tiles exposed in 2015–2016 has been analysed using Thermal Desorption Spectrometry (TDS). The deuterium (D) amounts obtained with TDS were compared with Nuclear Reaction Analysis (NRA). The highest amount of D was found on the top part of inner divertor which has regions with the thickest deposited layers as for divertor tiles removed in 2014. This area resides deep in the scrape-off layer and plasma configurations for the second (ILW-2, 2013–2014) and the third (ILW-3, 2015–2016) JET-ILW campaigns were similar. Agreement between TDS and NRA is good on the apron of Tile 1 and on the upper vertical region whereas on the lower vertical region of Tile 1 the NRA results are clearly smaller than the TDS results. Inner divertor Tile 3 has somewhat less D than Tiles 0 and 1, and the D amount decreases towards the lower part of the tile. The D retention at the divertor inner and outer corner regions is not symmetric as there is more D retention poloidally at the inner than at the outer divertor corner. In most cases the TDS spectra for the ILW-3 samples are different from the corresponding ILW-2 spectra because HD and D2 release occurs at higher temperatures than from the ILW-2 samples indicating that the low energy traps have been emptied during the plasma operations and that D is either in the energetically deep traps or located deeper in the sample. 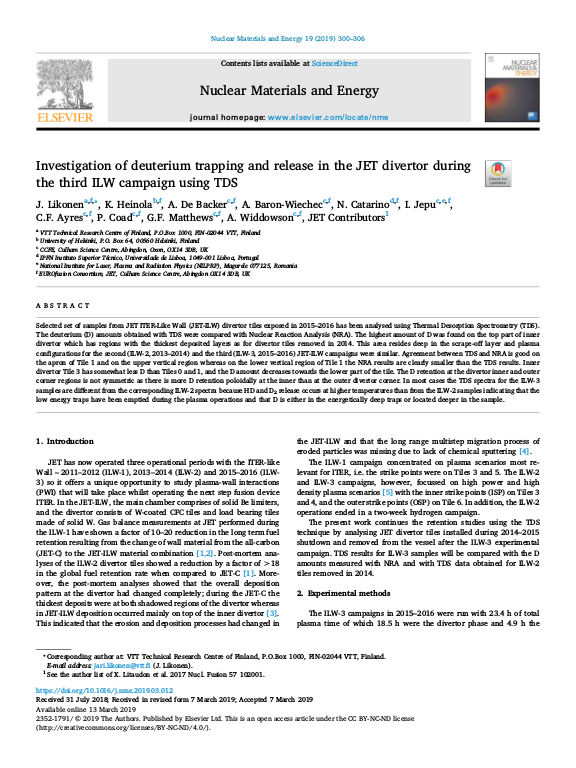