The CMS muon system in the region with 2.03<|η|<2.82 is characterized by a very harsh radiation environment which can generate hit rates up to 144 kHz/cm$^{2}$ and an integrated charge of 8 C/cm$^{2}$ over ten years of operation. In order to increase the detector performance and acceptance for physics events including muons, a new muon station (ME0) has been proposed for installation in that region. The technology proposed is Triple—Gas Electron Multiplier (Triple-GEM), which has already been qualified for the operation in the CMS muon system. However, an additional set of studies focused on the discharge probability is necessary for the ME0 station, because of the large radiation environment mentioned above. A test was carried out in 2017 at the Cern High energy AcceleRator Mixed (CHARM) facility, with the aim of giving an estimation of the discharge probability of Triple-GEM detectors in a very intense radiation field environment, similar to the one of the CMS muon system. A dedicated standalone Geant4 simulation was performed simultaneously, to evaluate the behavior expected in the detector exposed to the CHARM field. The geometry of the detector has been carefully reproduced, as well as the background field present in the facility. ... mehrThis paper presents the results obtained from the Geant4 simulation, in terms of sensitivity of the detector to the CHARM environment, together with the analysis of the energy deposited in the gaps and of the processes developed inside the detector. The discharge probability test performed at CHARM will be presented, with a complete discussion of the results obtained, which turn out to be consistent with measurements performed by other groups. 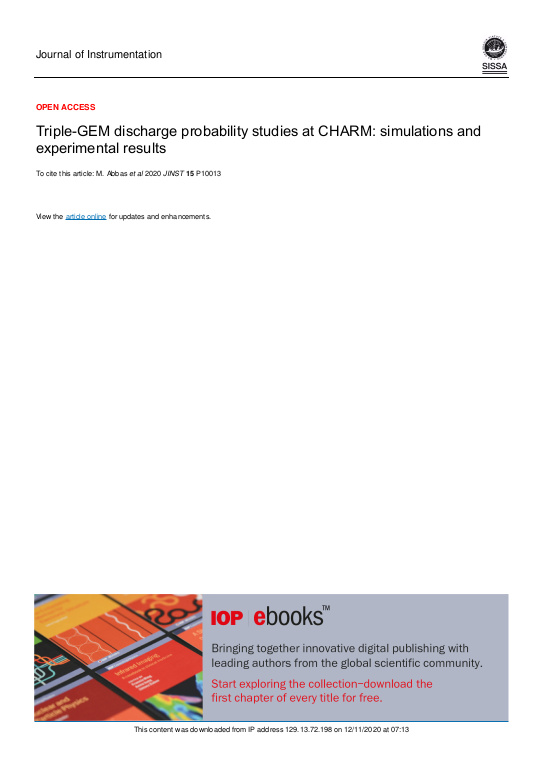