The neutron capture cross sections of several unstable nuclides acting as branching points in the s process are crucial for stellar nucleosynthesis studies. The unstable $^{171}$Tm(t$_{1/2}$=1.92 yr) is part of the branching around mass A∼170 but its neutron capture cross section as a function of the neutron energy is not known to date. In this work, following the production for the first time of more than 5 mg of $^{171}$Tm at the high-flux reactor Institut Laue-Langevin in France, a sample was produced at the Paul Scherrer Institute in Switzerland. Two complementary experiments were carried out at the neutron time-of-flight facility (n_TOF) at CERN in Switzerland and at the SARAF liquid lithium target facility at Soreq Nuclear Research Center in Israel by time of flight and activation, respectively. The result of the time-of-flight experiment consists of the first ever set of resonance parameters and the corresponding average resonance parameters, allowing us to make an estimation of the Maxwellian-averaged cross sections (MACS) by extrapolation. The activation measurement provides a direct and more precise measurement of the MACS at 30 keV: 384(40) mb, with which the estimation from the n_TOF data agree at the limit of 1 standard deviation. ... mehrThis value is 2.6 times lower than the JEFF-3.3 and ENDF/B-VIII evaluations, 25% lower than that of the Bao et al. compilation, and 1.6 times larger than the value recommended in the KADoNiS (v1) database, based on the only previous experiment. Our result affects the nucleosynthesis at the A∼170 branching, namely, the $^{171}$Yb abundance increases in the material lost by asymptotic giant branch stars, providing a better match to the available pre-solar SiC grain measurements compared to the calculations based on the current JEFF-3.3 model-based evaluation. 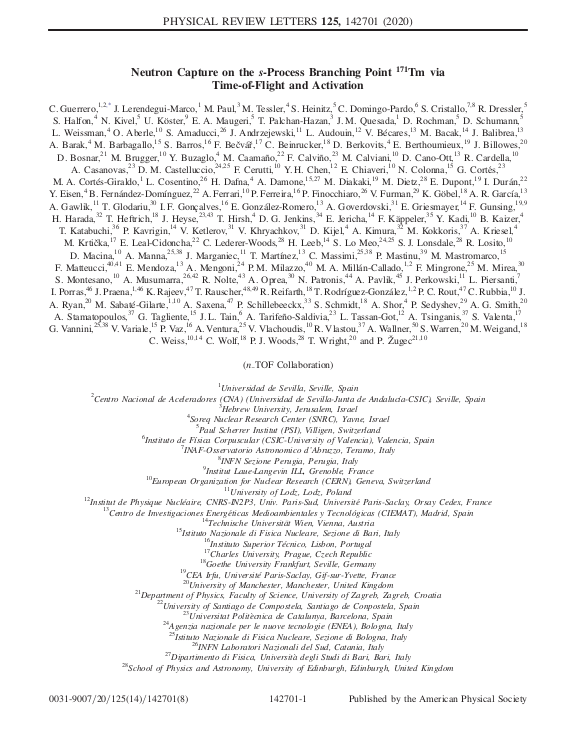