LOPES, the LOFAR prototype station, was an antenna array for cosmic-ray air showers operating from 2003 to 2013 within the KASCADE-Grande experiment. Meanwhile, the analysis is finished and the data of air-shower events measured by LOPES are available with open access in the KASCADE Cosmic Ray Data Center (KCDC). This article intends to provide a summary of the achievements, results, and lessons learned from LOPES. By digital, interferometric beamforming the detection of air showers became possible in the radio-loud environment of the Karlsruhe Institute of Technology (KIT). As a prototype experiment, LOPES tested several antenna types, array configurations and calibration techniques, and pioneered analysis methods for the reconstruction of the most important shower parameters, i.e., the arrival direction, the energy, and mass-dependent observables such as the position of the shower maximum. In addition to a review and update of previously published results, we also present new results based on end-to-end simulations including all known instrumental properties. For this, we applied the detector response to radio signals simulated with the CoREAS extension of CORSIKA, and analyzed them in the same way as measured data. ... mehrThus, we were able to study the detector performance more accurately than before, including some previously inaccessible features such as the impact of noise on the interferometric cross-correlation beam. These results led to several improvements, which are documented in this paper and can provide useful input for the design of future cosmic-ray experiments based on the digital radio-detection technique. 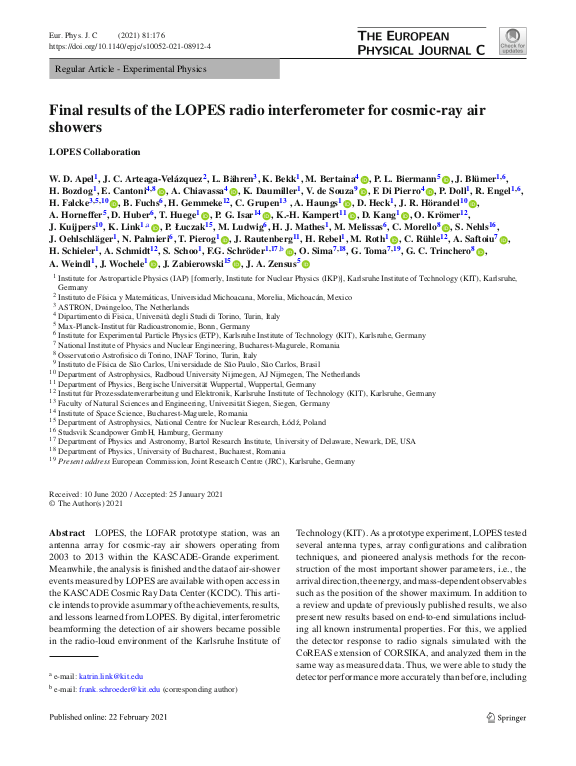