During the high-luminosity phase of the LHC (HL-LHC), planned to start in 2027, the accelerator is expected to deliver an instantaneous peak luminosity of up to 7.5×10$^{34}$ cm$^{-2}$ s$^{-1}$. A total integrated luminosity of 0300 or even 0400 fb$^{-1}$ is foreseen to be delivered to the general purpose detectors ATLAS and CMS over a decade, thereby increasing the discovery potential of the LHC experiments significantly. The CMS detector will undergo a major upgrade for the HL-LHC, with entirely new tracking detectors consisting of an Outer Tracker and Inner Tracker. However, the new tracking system will be exposed to a significantly higher radiation than the current tracker, requiring new radiation-hard sensors. CMS initiated an extensive irradiation and measurement campaign starting in 2009 to systematically compare the properties of different silicon materials and design choices for the Outer Tracker sensors. Several test structures and sensors were designed and implemented on 18 different combinations of wafer materials, thicknesses, and production technologies. The devices were electrically characterized before and after irradiation with neutrons, and with protons of different energies, with fluences corresponding to those expected at different radii of the CMS Outer Tracker after 0300 fb$^{-1}$. ... mehrThe tests performed include studies with β sources, lasers, and beam scans. This paper compares the performance of different options for the HL-LHC silicon sensors with a focus on silicon bulk material and thickness. 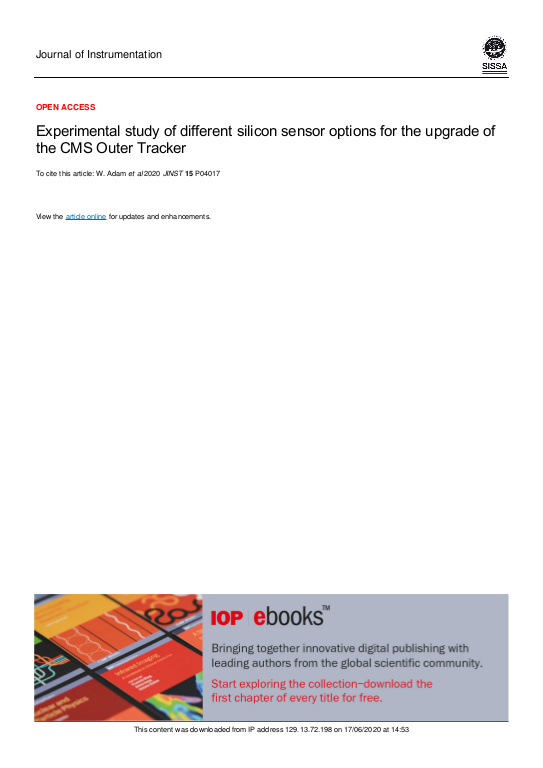