The impact of land-surface properties like vegetation, soil type and soil moisture, and the orography on the atmosphere is manifold. On the one hand, these features determine the evolution of the atmospheric boundary layer, in particular, the convective conditions and further the exchange of mass, momentum, heat, and humidity with the free troposphere. Subsequently, the land surface also influences the pre-convective environment. On the other hand, land-surface heterogeneity results in the spatial variability of the land-surface parameters, which often leads to thermally-induced circulations and associated convergence zones in the convective boundary layer. These, in turn, act as trigger mechanisms for convective clouds and precipitation. That means in simulations, the distribution and amount of clouds and subsequent precipitation depend on the resolution of land-surface and model grid spacing ($\Delta_h$) alike. Therefore, the focus of the study is to (i) compare areal mean precipitation for different model grid spacings and land-surface resolutions, (ii) analyse reasons for their differences, (iii) investigate spatial precipitation patterns, and describe relevant trigger mechanisms of convection. ... mehr

The impact of model grid spacing and land-surface resolution on convective precipitation is investigated within the framework of the \hdcp project (High Definition Clouds and Precipitation for advancing Climate Prediction). For that purpose, geographical areas with different types of complexity in the orography and considerable number density of lightning strikes (deep convection) are selected. The areas are: the flat terrain near Berlin (A1), the isolated Harz mountain range in central Germany (A2), and the complex terrain, the Black Forest mountains (A3). Six suitable days with weak large-scale forcing but a considerable number of lightning strikes are chosen. \ac{ICON} simulations in large eddy model setup have been performed using six model grid spacings: \ac{NWP} mode ($\Delta_{5000\,m}$, $\Delta_{2500\,m}$), LES mode ($\Delta_{1250\,m}$, $\Delta_{625\,m}$, $\Delta_{312\,m}$ and $\Delta_{156\,m}$) in a nested domain setup (control runs). The $\Delta_{156\,m}$ control run is the reference run. The impact of land-surface resolution on areal mean precipitation and precipitation patterns has been deduced by reducing the resolution of land-surface properties, e.g. vegetation, soil type, and the orography. The differences in simulated areal mean precipitation are explained through heat and moisture budget calculations. Variations in the precipitation patterns are analysed by investigating relevant triggering mechanisms. The source regions of the convective precipitation are identified by applying a backward trajectory model. To diagnose the turbulent sensible and latent heat fluxes at the Earth’s surface in the source regions of convection, their dependence on parameters like orography, soil moisture index, transpiration area index, and net radiation is determined using the standardised multiple regression techniques.

Concerning initiation of convection, overall the LES grid spacings show the similar thermally- and orographically-induced circulations in all areas (A1, A2, and A3). However, as demonstrated for A1 considerable differences in triggering could occur when the land-surface resolution is reduced down from 156 m to 5000 m. This finding holds when the resolution of 5000 m smoothed out those land-surface heterogeneities (e.g. lake breezes and urban heat island) which are responsible for convection initiation at 156 m land-surface resolution. 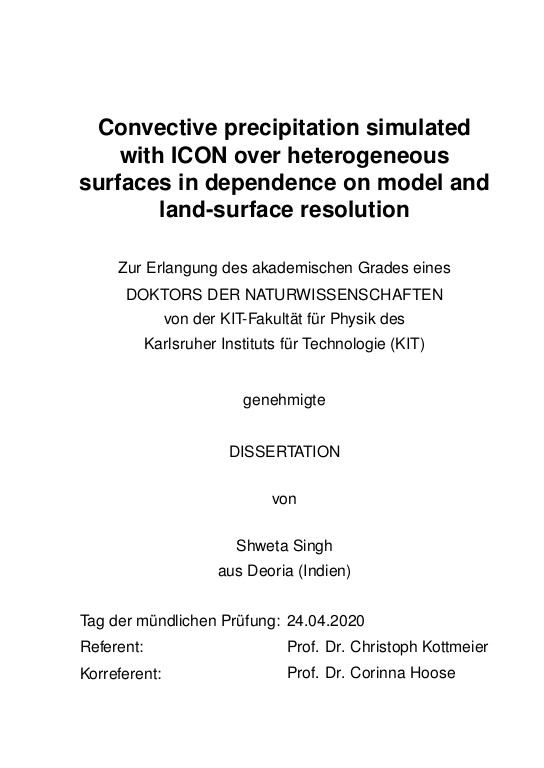