A hydrodynamic-numerical model of the river Rhine [online]

During the last centuries the river Rhine underwent a major
regulation process which separated the river­bed from its flood
plains and reduced the available areas for flooding. The river
was straightened and the consequence is the discharge
conditions were strongly changed and many recorded flood events
were occurred.
Serious floods at the river Rhine in 1993 and 1995 resulted in
the policy "Room for the Rivers" and in 1998 in the "Action Plan
Flood Defence" by the International Commission for Protection of
the Rhine (ICPR). The "Action Plan Flood Defence" aims at
improving the protection of people and goods against flood while
integrating ecological improvements of the Rhine and its flood
plains.
Targets include the enlargement of flood plains through dyke
displacement, the protection of valuable flood plains and flood
plain restoration. Further targets are the re­connection of the
rivers backwaters, the restoration of hydrological and
ecological interactions between river and flood plains and the
restoration of the riparian zone. Changing criteria for flood
retention areas will altogether contribute towards a more
... mehrnatural river landscape with a higher flood regulation capacity
and larger biodiversity.
In order to quantitatively assess the effectiveness of flood
plain restoration measures on flood regulation, the
hydrodynamic­numerical model for the whole Rhine of the free
flowing section is constructed. It consists of a 500 km long
section of the Rhine River, starting at Maxau, the first gauging
station of the free flowing section of the Upper Rhine, and
ending at Lobith, the hydrology gauge at the border between
Germany and the Netherlands. The important main tributaries of
the Rhine (Neckar, Main, Nahe, Lahn, Mosel, Ahr, Sieg, Ruhr and
Lippe) are also included in this model; the contribution from
the Murg is considered at the gauge Maxau.
The hydrodynamic­numerical model (HN­Model) of the river Rhine
and its flood plain areas has the ability to predict the
response of the river to imposed change. These obtained
scenarios are of use to make political decisions and for the
common understanding of the role of the wetlands on flood
regulation. Furthermore, it is also useful for many different
engineering works: The HN­Model is required for the design of
flood control structures and for the assessment of impacts of
alternative dyke configurations and flood retention options on
the water level. And last but not least, the results obtained
from the HN­Model are the boundary conditions for 2­D and 3­D
numerical models and physical models and they are also one of
the very important data for GIS applications on water resources
management. Altogether, the HN­Model of the river Rhine gives a
clear understanding on how the river adjusted to previous
designs and plan implementations.
The HN­Model of the river Rhine is based on the computer
software CARIMA, developed by SOGREAH (Prof. Cung, France).
Since 1963, it has already been used successfully for the
large­scale Mekong delta mathematical model (in Vietnam) and for
many other large rivers on the World.
At the Institute for Water Resources Management and Agricultural
Engineering, University of Karlsruhe, CARIMA is used for the
projects of dyke replacements at the Lower Rhine with very good
practical results. This model was expanded, in order to be able
to assess the effects of different flood retention measures
(polder) on the flood discharge at the Lower Rhine. Here is the
different effect between free flowing polder and controlled
polder. Moreover the model for the Upper Rhine and Middle Rhine
was extended and it included an optimization of the control
works.
Now a mathematical model of the entire Rhine distance downstream
of the barrage Iffezheim is existing, with that the effects of
construction measures on the discharge of floodwater can be
determined. 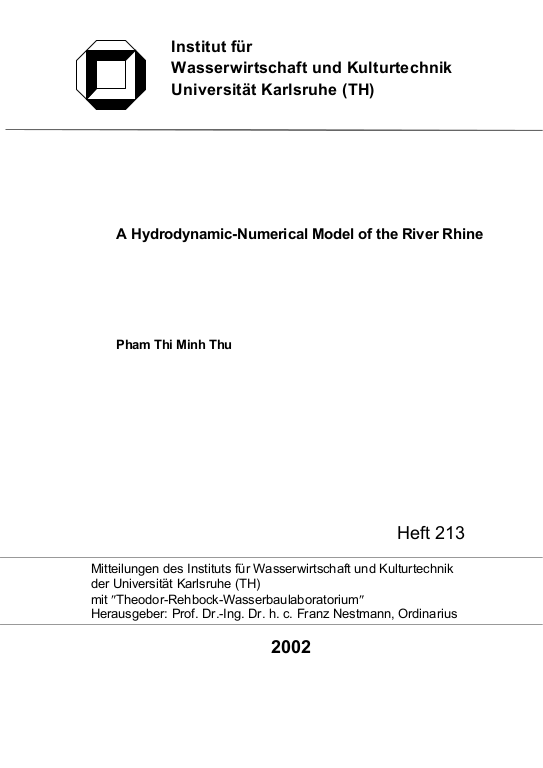